Ionizers are one of the many innovative man-made creations that are quite effective in providing us with quality air. The pre-pandemic world may have not been aware of such technologies however, once the pandemic hit, all bets were off. We were able to dig through technological creatures produced throughout the years, desperate to find something that can benefit us in this difficult time. Air purifiers and ionizers are some of these very technologies that have proved to be extremely resourceful in benefitting us.

What is an ionizer?

Before we get into the true nature of ionizers, we must get into the basics of an ionizer and how it works. An ionizer is one of the efficient ways of clearing the air of any airborne particles like dust and toxins existing in the air. These particles aren’t just bothersome to a fault, they also have the potential to trigger individuals with respiratory health issues and allergies.

An ionizer as the name suggests consists of negatively and positively charged ions where the negative ion gains an electron and the positive ion loses one. You might want to recall what you studied in science during school in order to get the gears in your brain going. Once you discharge them in the air, the negative ions attach themselves to the airborne particles, charging them in the process. The electrically charged particles bunch together with each other and are then forced to land on any surface available to them. They usually settle on walls, ceilings, tablecloths, floors, etc. When the particles come to rest on these surfaces, it becomes easy to clean them from the surfaces.

How to Get Rid of Dust in The Air? 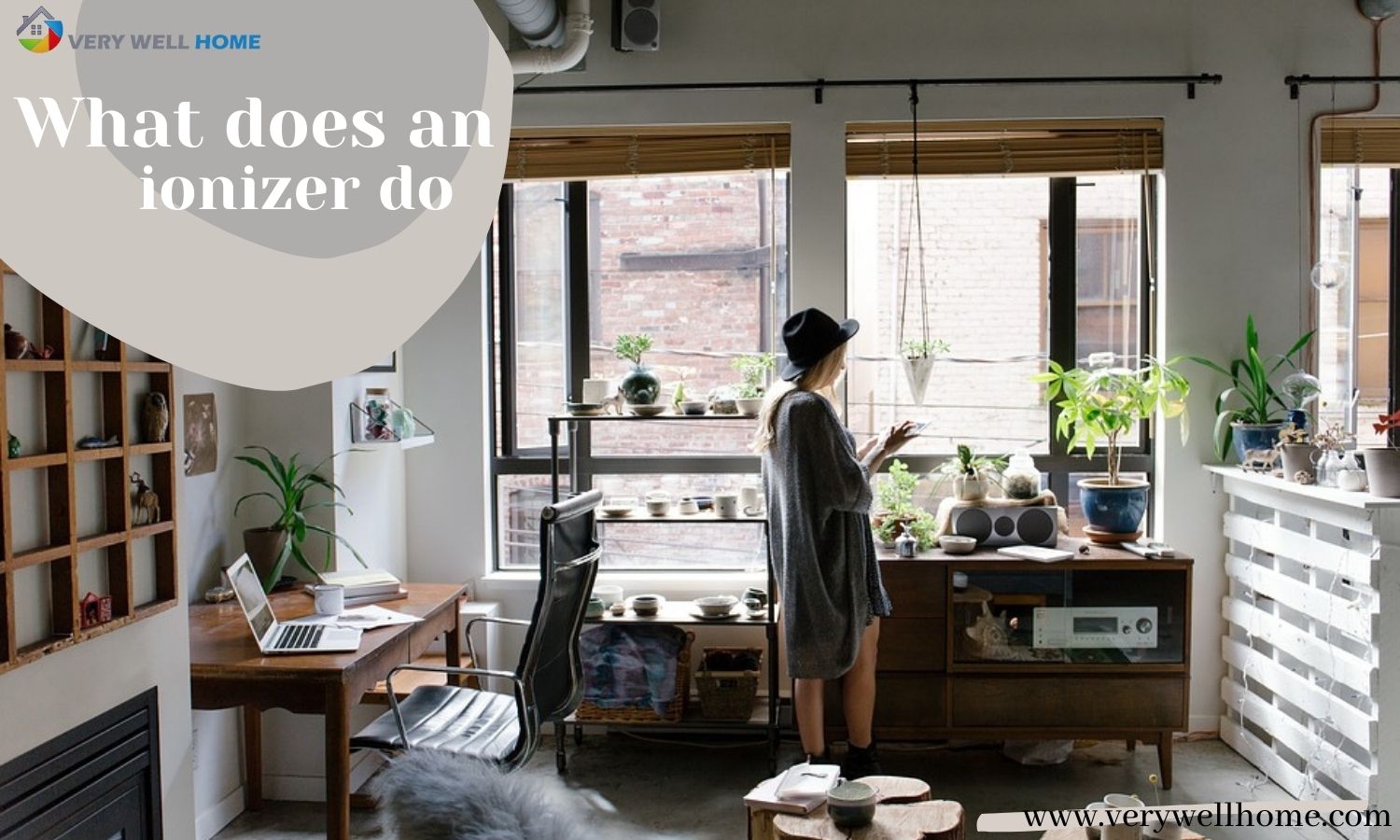 According to a scientific review, it is believed that the negative ions discharged from ionizers have the capability to stop the growth of viruses in the environment. It is also noted that the ozone emitted from the ionizers can be the source of inactive viruses present on surfaces. So far we’ve only studied ozone in global warming and climate change-related topics, let’s get to know about it in a positive light as well. Ozone is basically a colorless gas that is formed during the charging particles through ions emitted in the air. The gas inactivates viruses by attacking the body and all the major components it possesses. It destroys the gene material and membranes of these harmful bodies.

During the pandemic, the sales of ionizers have become extremely high as people want to possess anything that might be able to prevent the contagious and infectious nature of covid-19. Restaurants and offices have been purchasing these ozone-emitting machines to improve the quality of air within their areas as well as reduce the levels of the virus SARS-CoV-2 that is the source of covid-19. According to many reviews in 2020, it was found that ozone has proved to be highly effective at fighting against SARS-CoV-2. However, there isn’t much evidence that supports this statement. More researches need to be done in order to support it.

Negative ions discharged into the air have a number of benefits. They are able to remove small airborne particles that are hard to capture in the air. This way the small particles present due to odors can help in the complete removal of excessive odor smells. Due to this alone, the air seems fresher to inhale. Negative ions are also said to inhibit viruses and bacteria, once you discharge them into the air, the air becomes calm and can reduce stress as well. It can control your sleeping patterns, making it easy for you to sleep with no major difficulties. They can also boost your immune system, preventing you from catching any viruses and infections. You might also note having a better mood while you’re in this charged space as it can support your mood as well.

Where ionizers have a lot of benefits, unfortunately, they have a bunch of drawbacks that we should be aware of.

Despite their effective ways of removing small particles, ionizers are unable to reduce large particles from the air space as it might be difficult to let them pass through it. Large particles like dust, dander, and pollen are part of it. Due to this, it might lead to many respiratory health issues like asthma and allergies. This proves that might not be beneficial for you to purchase an ionizer if you have asthma or allergies.

Unable to remove odors or gases

Ionizers are ineffective against odors or gases like Volatile organic compounds(VOC). This dangerous gas is emitted from substances like paint, adhesives, cleaning supplies, etc. They are indoor pollutants and can be harmful to your health.

Even though ozone gas isn’t considered as one of the most effective ways of eliminating viruses, there’s a downside to them as well. Ozone gas, when inhaled can create temporary health issues like shortness of breath, coughing, chest pain, etc. It can also lead to permanent health issues with respiratory health problems.

What happens if you are in a room with an ionizer?

In general, ionizers are devices that are used to ionize air in a room. This process involves adding or removing electrons from the particles in the air, and it can have both positive and negative effects depending on the ionization process used. For example, if an ionizer were to produce negatively ionized air through a process of negative ionization air purification, this could help to reduce airborne allergens like dust, pollen, and pet dander.

Additionally, ionizing the air has been shown to improve mood by increasing serotonin levels, which may be helpful for anyone dealing with symptoms of depression or anxiety. However, if an ionizer were to produce positively ionized air through similarly negative ionization air purification methods, this could have unwanted consequences by promoting bacterial growth or increasing irritants like smoke and smog.

Ultimately, it is important to understand how different types of ionization can affect your environment so that you can make informed decisions about whether or not you want an ionizer in your home.

Which is better air purifier or ionizer?

When it comes to choosing an air purifier or ionizer, there are a number of factors that need to be considered. On the one hand, an air purifier is more efficient at removing pollutants from the air and trapping particles such as dust and mold spores. This is because it uses a physical filter to sift out these contaminants, whereas an ionizer simply releases positive and negative ions into the air in order to neutralize airborne particles.

However, while an air purifier is certainly more effective at cleaning the air, it can be less effective when it comes to combating odors or other gases. In contrast, ionizers have been shown to be quite effective at neutralizing unpleasant smells and chemicals in the environment. Ultimately, which type of device is better depends largely on your specific needs and how you plan to use it. Regardless of which one you choose, however, just be sure to opt for one that has been certified by HEPA standards for performance and effectiveness. After all, your health is worth it!

Can an ionizer give you a headache?

Many people worry that using an ionizer can cause headaches and other unpleasant symptoms. While there is some evidence to support these concerns, it is important to consider all the factors involved. First of all, some people may be more sensitive to changes in air quality, which could potentially trigger a headache.

In addition, some studies suggest that exposure to small amounts of ozone may have a temporary inflammatory effect that could result in discomfort for some individuals. However, it is also important to note that modern ionizers produce very low amounts of ozone and are designed in a way that reduces any possible risks associated with using them.

Ultimately, the risk of experiencing health issues due to an ionizer likely depends on a number of different factors, so it is best to consult your doctor before making any decisions about whether or not it is right for you.

Final verdict: How Does an Ionizer Work

Ionizers are extremely effective at providing you with quality air along with protection from harmful viruses. The post-pandemic world has been striving to adjust to the new normal, leading it to take precautionary measures that it wouldn’t have even though of taking a few years ago. Introducing technologies ionizers into their lives is one of them. However, no matter how many benefits they provide you with before you bring them into your lives, make sure to soak up whatever knowledge you can before you make a decision. This way you’ll be on the safe side of things without worrying about the consequences.